The first step to this puzzle is to solve the clues given. There are a few easier clues to give solvers an in into the puzzle. After solving a couple, one might notice that all the words consist of 8 letters. Here are the solved clues.

At this point we might notice that the marked seat (as clued by the flavor text) from the left words provides us an ordering. We further notice that when matched up with the right side, the word pairs are cyclic rotations of one another. The next step is to now fill in the merry-go-rounds in the order given. The arrow in each diagram indicates the canonical start position for reading the word. They all also point clockwise, which indicates we should be reading the words clockwise. Thus we can label all the seats with the left word, starting from the direction indicated in the merry-go-round. We get the following grids by starting from the given direction and going clockwise (notation: starting position is underlined, initial position of marked seat is highlighted in yellow).

The next natural thing to do is actually run each of these merry-go-rounds. Rotating the words in the grid until we read the right word (from the canonical starting position), we find the following series of grids. While undergoing the rotation we keep track of the locations of the marked seat as well (final position of marked seat is highlighted in green).

At this point we notice that for each grid we have two positions indicated by the marked seat of each pair of words, in 8 directions. We can use this pair of directions to extract via semaphore (as clued by the pair of flags “on top” of each merry-go-round), we find that, to get from one word to the next, we had to ride the DANCING HORSES.

The extraction for this puzzle was one of the most discussed throughout the writing and testsolving process. After conversations with various testsolvers, I felt that this was the cleanest (albeit, admittedly, not the most natural) method of extraction, while trying to stay true to the idea of word rotations.

Keen solvers who did Smogon Puzzle Hunt (now Silph Puzzle Hunt, which ran just two weeks ago) as well might notice the idea is similar to that of a certain meta in SPH 3 last year. At that time, we had already written this puzzle, to very amusing effect for our team during the hunt. For context, the discussion below was when we had 2-3 solves on puzzles related to that meta, without even having unlocked it. 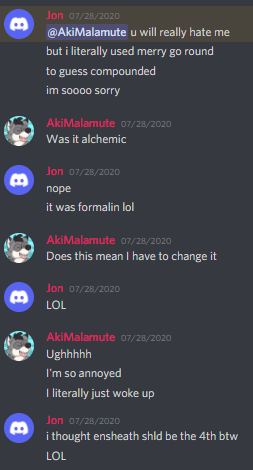 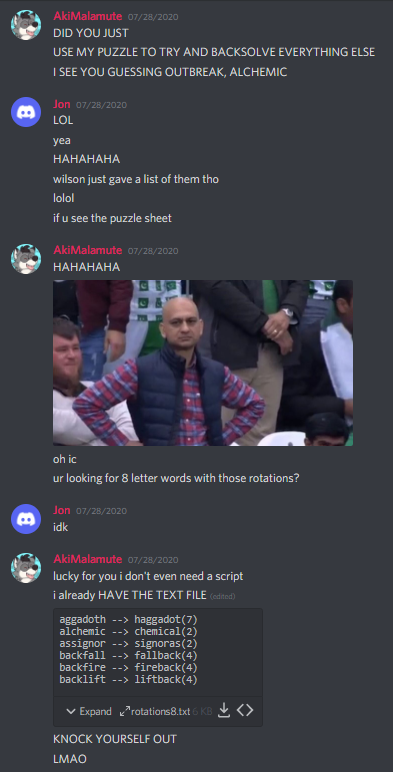 It's incredibly coincidental that the puzzle not only used word rotations, but in fact specifically words of length 8 being placed in an 8-directional grid. We ultimately decided the puzzle was different enough, and so we kept it (because of the idea of actually rotating and using semaphores as extraction), and the fact that it is for a puzzle rather than a meta.

We really hoped that this would be the only puzzle with an overlapping concept (spoiler alert: it was not), but this puzzle taught us that if you take almost 2 years to create a hunt, it‘s bound to happen.